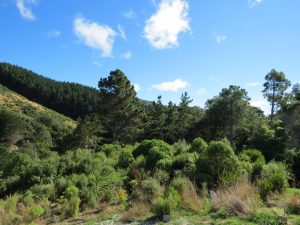 Makara Natural Burial Cemetery. As close to a garden as you can get.

In theory being buried on your land is lawfully possible – in practise, logistically difficult. With New Zealand being a long skinny landmass, rich in public cemeteries, chances of dying 32kms (20 miles) away from one is statistically unlikely.

New Zealand’s Burial & Cremation Act dates back to 1964 (but is currently under review). It allows for a body to be buried on land in; a public cemetery, a denominational burial ground, a recognised private burial ground that may have been established before the Act (with permission from the District Court) or an urupa.

Approval for someone to be buried at a place of particular importance would only be granted ‘under exceptional circumstances’ for a ‘public notable whose deeds were of national significance’. Families who have in the past applied, citing a strong association with their land, have been declined.

Public submissions in response to the review of the Act have requested changes to the law in New Zealand. In the UK and some Australian states permission for burial on private land is more often granted. If you have visited Rarotonga, burial plots in the front garden are a common sight.

However, until the Act is potentially revised, there is an interim solution for those who enjoy the garden-like aesthetic. In Wellington, interred amongst thriving native bush are more than 200 mainly Wellington residents who have opted for a Natural Burial. The scheme was established in 2008 by the not-for-profit ‘Natural Burials’ with the plots administered by the Wellington City Council.

Requirements are that the body is not embalmed, is dressed in natural fibres and buried in a coffin or shroud made from bio-degradable, sustainable products using minimal screws and glues. A native tree (your choice of 21 plants) is planted on the grave site and mother nature takes over. The body returns to the earth, becoming part of the ecosystem and the tree becomes part of a forest.

An alternative to an eternity at the bottom of the garden over planted with pansies – here you could push up Oleria arboresences – native tree daisies, instead.